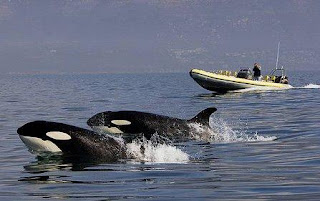 More and more, we are seeing Orcase in False Bay. They have come in to hunt the sevengill cow sharks that used to hang out in their dozens at Miller’s Point in Simon’s Town and can often be seen on the western side of False Bay – probably searching for more.

Also suspected of chasing the great white sharks from Seal Island (where, news has it, the sevengill cow sharks have moved to), they have also been seen hunting huge pods of dolphins (which, on its own was an amazing site).

The front page of “The Argus”, our local Cape Town newspaper, featured an amazing photo of a Killer Whale with a huge dolphin in its mouth a few years ago.

We also saw Orcase in Tofo (Mozambique) on one of our trips there. It was fascinating to watch them hunting. In this case, they were hunting a mother humpback whale and her calf and the chase went on for hours.

There are 3 distinct species of these warm blooded, air breathing mammals: Resident Orcas, Transient Orcas, and Off-shore Orcas. The main factors which set each species apart are social behavior, physical appearance, preferred food, and vocal dialects. At this stage, there is little known of the Off-Shore species as they are seldom seen in protected coastal waters. Although the travelling ranges of Residents, Transients and Off-shores overlap, they have never been seen to mix.

Resident Orcas eat predominantly fish and although they are often seen in the vicinity of other marine mammals they usually ignore them. Transients, in contrast to Residents, feed almost exclusively on marine mammals or seabirds. The favoured prey of transients is harbour seals, sea lions, and porpoises. Very little is known about the diet of the Off Shore species, but it is believed that they prey on fish for at least part of the year, however preying on Marine Mammals is also possible.

Orcas often hunt cooperatively in pods for food. They work together to encircle and herd prey into a small area before attacking. When hunting a large whale, a pod of Orcas may attack from several angles (generally transients).

The conical and interlocking teeth of Orcas are well suited for a wide variety of prey, from small schooling fish to large whales. The number of teeth varies among individuals – but there are usually 10 to 14 teeth on each side of the jaw, a total of 40 to 56 teeth. Each tooth is about 7.6 cm (3 in.) long and approximately 2.5 cm (1 in.) in diameter.

Males, or bulls, begin maturing at 12 to 14 years of age and attain physical maturity at about 20 years. Most males probably reach a length of 8 to 9 metres. Females, or cows, average about 7 metres in length and reach reproductive maturity at about 14 to 15 years.