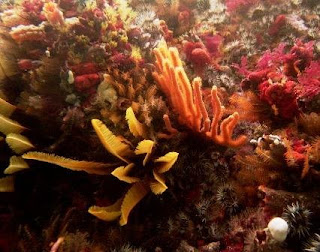 This morning, we took some students to dive Quarry in Glen Cairn. The sea was beautifully flat and perfect for this dive site which requires good entry and exit timing when there’s a bit of a swell.

After a short surface swim, we descended into the kelp forest and followed the reef out to deeper water. The rocky gullies were covered with feather stars and the sand in between was crawling with brittle stars.

This is a fantastic site with loads to see. Here, you will find many fish – from tiny fry to fully grown Red Roman. At one point, we were surrounded by so many fish, it felt as if we were diving one of the fish-rich reefs of Mozambique – Doodles in Ponta do Ouro with cold water, rather than tropical fish!

After 50 minutes, we finished our dive with a gentle swim underwater back to shore. Yet another great False Bay dive!