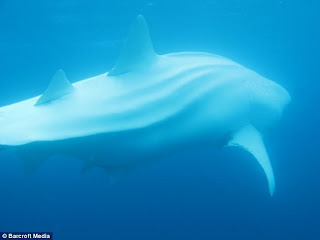 Divers were stunned by a sighting of a huge albino whale shark as it glided through the waters off the coast of Darwin, an island in the Galapagos group.

The female whale shark, believed to be the only one of its kind, was first spotted by diver and naturalist Antonio Moreano in the Galapagos islands when he took a group of tourists on a nature cruise.

Antonio knew he had to get up close and personal with the placid creature and see the whale shark in its own domain. “It was 4:30pm and I and six guests were at Darwin’s Island, set to make the fourth dive of the day.” said Mr Moreano. 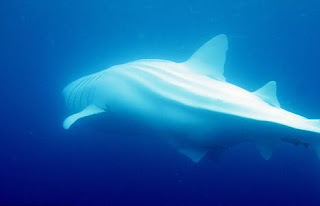 “As we were on the boat checking our equipment I saw a big white thing at the surface of the water. At the beginning I could not tell what it was – I had never seen anything like it before – so I decided to put my mask on and put my face over into the water”.

“Right after this I explained to my guests that it looked like a white whale shark and we were going to all jump in the water and try to follow it. I told everyone to keep a distance and not disturb it so we all jumped in the water and followed it for five minutes. I kept up swimming with it and I got very close – even the eye was white”.

Mr Moreano dived to around 50 feet as he attempted to catch up with the whale shark. “I free dove 50ft down and is when I finally managed to get some pictures of it” he explained. “It was difficult because I did not want to frighten it away so I stayed a few metres away”.

The whole experience lasted around 30 minutes. From the size and shape of its fins, Mr Moreano identified the albino animal as a female.

“All whale sharks found in Darwin’s Arch are big fat females, we have never seen a male – or at least I haven’t” he said.

“There is a big mystery about our whale sharks: they all show up at Darwin and Wolf from June until November and they all go in circles around the arch dive sites.”

“Unfortunately no-one has seen this albino whale shark since.”

We’re wondering whether it is Migaloo, the famous albino whale shark that has been found at Ningaloo reef in Australia?

www.dailymail.co.uk
From a report by Richard Shears