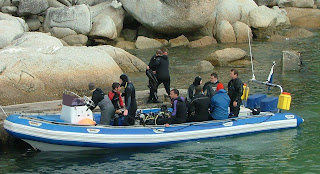 Last weekend we had a great dive on the SAS Transvaal. Sean and Jenny joined us from Gauteng and this was their first Cape dive. They’d just come back from diving the Red Sea, so from one wreck (Thistlegorm) to another…

OK, so SAS Transvaal doesn’t have the motorbikes and trucks, wellington boots and old tyres. She does, however, have some great marine life and we spotted a number of pyjama sharks, orange gas flame nudibranchs, hottentot and many different sea fans, soft corals and sponges.

Lying at 36 metres on the sand and with her deck at 24m, we had a 30 minute dive, followed by an entertaining saftey stop as we were joined by a Cape fur seal who kept us amused with its antics.

Best dived in the winter months when the water clears up and calms down on the western side of False Bay. You must come and join us!